Another year, another ICRS has passed. A conference of which some of us have been a participant since 2006. As usual, ICRS meeting was the great opportunity to meet with fellow cannabinoid scientists and learn about the most recent research in the field.

This year, Kasia attended ICRS together with post-doctoral fellow Kuba, two PhD students: Marta and Kuba and an undergraduate student: Przemek. It was a second time they took a trip as a Painlab team, although, for most of them it was their first time in the US. Due to differences in personal preferences towards the flight requirements, each one of them took another airplane to get to the US. However, we have all successfully met in Bethesda, MD, at the most important meeting for every cannabinoid researcher. This year programme was filled with pharmacological research upon novel selective ligands for cannabinoid receptors and their effects in preclinical models and most recent clinical reports upon medicinal properties of cannabis. Sessions covered various themes of cannabinoid research: pain, reward, immune function and neurodegenerative disorders. The most interesting were the plenary lectures, given by Susan R. B. Weiss, Roger Pertwee, George Koob, Matt Hill, Bryan Roth and Alexandros Makriyannis, which discussed concepts valuable for every member of the society, such as effects of cannabis laws upon public health, history of cannabinoid research and development of the field, role of the endocannabinoid system within reward system or stress, novel pharmacological research techniques and the most important thing of them all, cannabinoid receptors themselves.
Scientific meetings are not only about data, but they are also great opportunity for broadening of personal perspective through travelling and developing social links with others. Our trip was a great chance to catch up with our good old friends and mentors. Kasia greatly enjoyed time with prof. Di Marzo’s current and former lab members and Vincenzo himself. So many great memories came back! Annual Meeting on Cannabinoids was also a great occasion to talk to our collaborators about ongoing research. We chatted to prof Roger Pertwee and to dr Martin Kaczocha and discussed future plans. It was also nice to talk to our polish colleagues from prof. Barbara Maliowska’s lab. Together we constituted really significant European contribution to this year’s ICRS. Among 500+ participants of ICRS in Bethesda there were only 50 scientists from Europe, so we can assume Poland was best represented country from Europe! Well done Poland!

After scientifically and socially intensive week in Washington DC, we took a couple days off to do a little sightseeing around New York City, which amazed of all us with its architecture, vibrant lifestyle and cultural background. With tons of pictures, good memories from US and inspiration for future work, now we’re looking forward to the next ICRS in one of Ireland’s most beautiful and cultural counties – Galway .
We do hope that those of you who participated at the The 28th Annual International Cannabinoid Research Society Symposium on the Cannabinoids also had a great time in Bethesda. See you July 2020 in Galway! 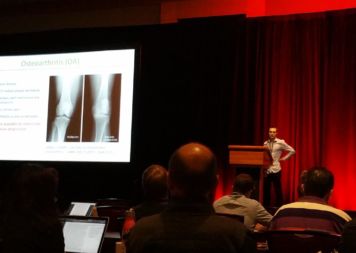